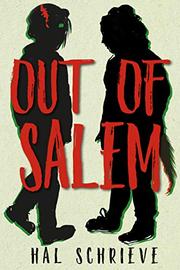 A genderqueer zombie and a lesbian werewolf resist a corrupt government that wants to incinerate them in this debut novel by Schrieve.

Any day now, Z, a white, 14-year-old zombie, might fall apart without the intervention of illegal necromancy to hold them together. Their whole family died in a car crash that should have killed them too. In their anti-monster small town of Salem, Oregon, Z’s only allies are their caretaker, Mrs. Dunnigan, an aging, brown-skinned lesbian whose health is failing, and Aysel Tahir, a fat, Turkish-American lesbian who faces life-threatening danger if anyone discovers she’s an unregistered werewolf. When a murder and accusations of werewolf terrorism shine a national spotlight on their town, Z and Aysel stand together to survive. Set in 1997, this darkly humored fantasy explores censorship, government surveillance, homelessness, and real-world (not just magical) forms of oppression. Chapters alternate between Aysel’s and Z’s points of view, winding their individual conflicts together. While classmates bully Aysel for her fatness, she owns her size and it makes her powerful. Schrieve depicts diversity among the queer and trans characters, highlighting how economic and racial privilege make the concerns of middle-aged, rich, white trans women different from those of a young, trans woman of color without access to medical care. Tension burns hot until the explosive conclusion, which begs for a sequel.

On fire with magic and revolution.