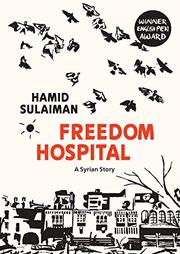 The book opens with a dozen headshots and short biographies of characters, including Yasmin, the young woman who founded the eponymous hospital to help the rebels battling the Syrian government and to fulfill her father’s dream of opening a hospital, which had been thwarted by bureaucracy and corruption; Abu Taysir, a militia leader and former political prisoner in his 60s navigating the web of factions engaged in the conflict, including the nascent Islamic State; the Colonel, a merciless commander in the Syrian army; Haval, a philosophical army deserter who hangs around the hospital to be near his girlfriend, Zahabiah, a refugee who works as the cook; and Salem, a patient whose head wound has dashed his memory, leaving him unsure which side he is on. A throughline involves Yasmin’s childhood friend Sophie, a French journalist Yasmin helps to sneak back into Syria to document the war, but the book ranges far and wide, giving each character at least one solid beat to dramatize the situation’s complexity while also including omniscient sequences crafted from news footage and YouTube videos and even a brief, psychedelic aside into the historical roots of the Shiite-Sunni divide. The art’s flat blacks, stark whites, and heavy lines give the work an almost impressionistic feel, bringing to the real-world images a rotoscoped look and simplifying both fact and fiction to touchstones (furrowed brows, falling tears, spattered blood). This notion also encapsulates the work overall—expressive and representative but not necessarily deep or rounded. As Sulaiman says in his postscript, the conflict is too complex to be fully captured; nevertheless, here is a striking look.

A heartbreaking and eye-opening primer to the quagmire of a generation.