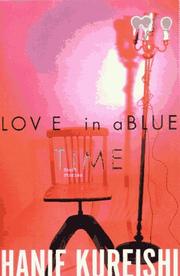 LOVE IN A BLUE TIME

An ebulliently realistic collection from savvy British screenwriter and novelist Kureishi (The Black Album, 1995, etc.). It's refreshing to read a writer of such alert and unaffected skill. Unlike American minimalists, Kureishi looks outward and into the lives of others, coming back with fiction that is large, rugged, and true. And his canny imagination avoids sentimental missteps. In ``The Flies,'' for instance, chronicling an infestation of insects in the life of a young couple, he writes with a mordant flair for the parable and grotesque that recalls Kafka: ``At night he begins to dream of ragged bullet-shaped holes chewed in fetid fabric, and of creamy white eggs hatching in darkness. In his mind he hears the amplified rustle of gnawing, chewing, devouring.'' Kureishi is above all a social observer, offering shrewd reports on a generation of urban Brits who've survived their youth and don't know what's supposed to happen next: career, money, marriage, or the more vertiginous and splendid pleasures of liberty prolonged. Avoiding moral judgment, he can sympathize with all concerned—while sporadically tweaking them, as he does particularly well in ``The Tale of the Turd,'' in which a 44-year-old ne'er-do-well goes to dinner at the home of his 18- year-old girlfriend's all too respectable parents. Existentially uneasy, he winds up in the loo, mid-supper, with one big problem to face: ``I glance at the turd and notice little teeth in its velvet head, and a little mouth opening.'' After semi-mortal combat with this unwanted guest, he throws it out the window: ``On, on, one goes, despite everything, not knowing why or how.'' Kureishi's characters do mostly choose to go on, even when they've run out of drugs, money, lodging, and friends. The charm of their jaunty style of perseverance is not small. Some find a moment's redemption or two in Kureishi's ever more apt evocations of sex, earthily unromantic and serenely accurate. Roguish intelligence is everywhere here.