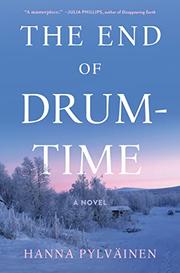 This second novel by award-winning author Pylväinen—following We Sinners (2012)—brings to life a clash of cultures in 19th-century Lapland.

In 1851 in the remote town of Gárasavvon in northern Scandinavia, preacher Lars Levi Laestadius tries to turn his congregation of Swedes, Finns, and Sámi reindeer herders away from alcohol—“the Devil's piss”—toward God. “He looked at his congregants, his parishioners, his reindeer, skittish on the snow, and he saw them multiply before him, ten upon ten, so that the back of the church was not littered with drunks who stank of their drinking, but instead each face shone clean and each body’s blood coursed with the mysteries and the magics of Christ.” Revered among his followers, his spiritual awakenings begin to concern the church authorities to the south. Meanwhile, one of his daughters falls in love, the local shopkeeper laments his choices, a local woman breaks her engagement, and the Sámi herders prepare to drive their reindeer to the sea on their traditional route. Pylväinen seamlessly moves among different points of view, giving rich and satisfying breadth to a story of cultural upheaval. In the little Gárasavvon church, a confrontation about faith starts a chain reaction. And in Russia, decisions are being made that will impact everyone, the fallen and the saved. Pylväinen’s excellent debut novel concerned a contemporary American family, members of the obscure religious sect called Laestadianism; this novel goes back to its roots. Beautifully written and masterfully researched, the book's greatest triumph is the characters, full of human foibles, passions, and tenderness, jealousy, courage, doubts, and moments of transcendence. “He looked at the children, and he wondered suddenly about the length of their lives, if they would lose their reindeer, if they would go on to live in homes with walls that didn’t move….The thought made him inexpressibly sad.”

Ambitious and resonant, a vivid, fascinating, and moving novel.