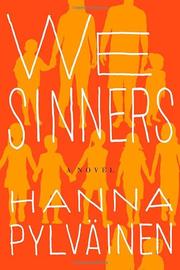 In a book said to have plenty of elements of roman à clef about it, University of Michigan M.F.A. Pylväinen recounts life in a family of Finnish-American true believers for whom the word “fundamentalist” doesn’t quite do the trick. The Rovaniemi family practices a particularly austere brand of Protestantism, or, as a daughter puts it, “a kind of Lutheranism where everyone is much more hung up on being Lutheran than all the other normal Lutherans.” She adds, for emphasis, “End of story.” But of course it’s not, as her bewildered Chinese-Malayan-American beau learns while trying to comprehend both Laestadianism and Uppu’s odd mom and pop, who have had their own struggles. As the novel opens, another daughter is just beginning to buck at the traces, explaining to another young suitor that she can’t go to the dance with him because—well, just because she can’t, end of story. And again, the story doesn’t end but unspools, ever so unhurriedly, to reveal the complex dynamic of a father who’s wound up way too tight “and now expressed everything, even anger, in disappointment,” though he’s not without his sympathetic aspects; a mother who beams love and support and who trusts her children implicitly; and the certainty the two elders share that the world is going to come and steal their children away, luring them to the big city, where they’ll wear fancy clothes and dance and fornicate. Even so, contemplates Pirjo, the matriarch, “You can lose your faith anywhere.” Considering what life has thrown at them, it’s amazing any of the family remains steadfast in their alienating religion, and some do indeed drift—but not always far and not always along paths that we might expect. Pylväinen can be faulted only for over-compression: her story, beautifully written, is taut to the point of snapping, and it could have used a couple of dozen more pages of breathing room.

It’s always a good thing when one wants more instead of less. A promising debut, and a glimpse at a hidden American subculture that few readers will suspect even exists.