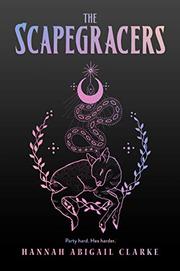 From the Scapegracers series, volume 1

Since becoming an orphan at 7, it’s mainly been Sideways Pike and her spell book—until a raucous Halloween party blasts her world open.

In the West High social hierarchy, Jing, Daisy, and Yates are the queen bees who rule the roost. When they hire Sideways—offering her $40 in exchange for casting a spell to make their party the best of the season—the result isn’t only memorably spooky, thanks to the unbelievable creep factor à la Sideways, but also a disturbing mystery that bonds all four girls. To Sideways’ utter bewilderment, the triumvirate fiercely claims her, and she’s now a member of the most badass girl clique. Their camaraderie strengthens with each narrow escape as they curse toxic males and witch hunters and build their collective power. Readers will love the spooky pop-culture easter eggs and appreciate a fresh spin on the mean girls theme: Readers won’t despise, but will root for, this cunning, crass, and fiercely caring coven. Bitingly honest, fast-paced dialogue is a solid strength, as is the lyrical language, which is so intimate that readers will viscerally know how magic and emotions feel in Sideways’ body. Jing is cued as Chinese American, Yates is black, and all other characters are presumed white, including Sideways, who is lesbian, and her two adoptive dads.

Teenage girl magic is palpable, urgent, and simply marvelous in this must-have debut.