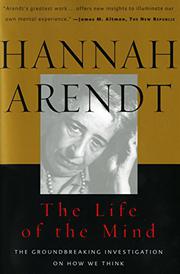 THE LIFE OF THE MIND

This book may sound forbidding, but do not be dissuaded, for it is a majestic work of deep humility and earnestness, and radiant imagination. Since it consists of Arendt's Gifford Lectures (1973-74), it retains much of the directness of spoken prose, and, as edited by Mary McCarthy (who contributes an afterword), it is fluent and felicitously phrased. Taking as her subject the three principal activities of mind—Thinking, Willing, Judging (having examined the practical life of Labor, Work, and Action in The Human Condition) she draws with studious care and far-reaching erudition from the history of ideas to argue the necessity of Thinking and to chart the rise and fall of Willing in Western culture. (Judging is addressed directly only in a fragment at the end.) Arendt's reflections were originally prompted by the Eichmann trial, which had disclosed to her a man whose hideous actions had arisen from sheer thoughtlessness. Thinking does not itself create morality or grasp truth or knowledge, but it breeds the self-consciousness that makes them possible. Hence, Thinking is the indispensable source of meaning in experience, and philosophers ignore this who "mistake the need to think with the urge to know" and thus dismiss all thought that cannot produce scientific Truths. Kant alone saw the decisive difference between reason-thinking-essences-meaning on the one hand and cognition-knowledge-appearances-truth on the other; and Socrates had set the ruling moral precedent; the thoughtless life has no meaning. This elegant and moving meditation on the imperatives of critical thought passes into a more strenuous dialogue with the great thinkers on the nature and history of Will. Locating the discovery of Will in Christianity's struggles with sin, Arendt sees Will rise with the belief in progress and then fade with the denial of progress, freedom, and self-assertion in Nietzsche and Heidegger. Although she advocates thinking and free will, Arendt sheds no tears over the tough secularity of modern thought. And these explorations of the life of mind perfectly exemplify the vigorous life that she praises—most pertinently and accessibly in Volume One.