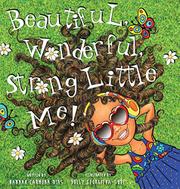 This tan-skinned, freckle-faced narrator extols her own virtues while describing the challenges of being of mixed race.

Protagonist Lilly appears on the cover, and her voluminous curly, twirly hair fills the image. Throughout the rhyming narrative, accompanied by cartoonish digital illustrations, Lilly brags on her dark skin (that isn’t very), “frizzy, wild” hair, eyebrows, intellect, and more. Her five friends present black, Asian, white (one blonde, one redheaded), and brown (this last uses a wheelchair). This array smacks of tokenism, since the protagonist focuses only on self-promotion, leaving no room for the friends’ character development. Lilly describes how hurtful racial microaggressions can be by recalling questions others ask her like “What are you?” She remains resilient and says that even though her skin and hair make her different, “the way that I look / Is not all I’m about.” But she spends so much time talking about her appearance that this may be hard for readers to believe. The rhyming verse that conveys her self-celebration is often clumsy and forced, resulting in a poorly written, plotless story for which the internal illustrations fall far short of the quality of the cover image.

Mixed-race children certainly deserve mirror books, but they also deserve excellent text and illustrations. This one misses the mark on both counts. (Picture book. 4-6)