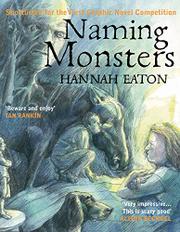 When teenage Fran lost her mother, the trauma derailed the placement exams she had been taking at the time. A year later she awaits the results of her retakes and whiles away the late summer hanging with best friend Alex, fooling around with pretentious boyfriend Sam, and wrestling with a vague epileptic condition that can suddenly send her spiraling into a semivegetative state. To thwart an onset, she recalls the details of folkloric creatures, a subject she specializes in (having tangled with a phantom or two). Fran’s monsters skew less familiar—no zombies and vampires here—and more disturbingly abstract, like the brag, “a local devil of the north country” that appears variously as “a naked man without a head, a calf wearing a white handkerchief or four men holding a white sheet.” With these deliciously unsettling details and the throbbing of her stacked, crosshatched lines shading images to the look of molded pewter, Eaton shows a great familiarity with the terrain of dread. One image—terrifying and almost totemic in its simplicity—shows Fran in a barren room, facing a darkly opening door. Near the end of the story, a pair of powerful nightmare sequences feels cut from the same cloth as the darker parts of David Lynch’s works—striking visuals, hauntingly concise language, and incantatory pacing. Yet cutting through the darkness and dysfunction are humor and hope. Eaton has a great ear for dialogue, and the Punch-and-Judy faces of her smaller figures have a folk charm befitting the work. Things spread a bit thin with the story ranging over teen angst, grief, wild grandmas, classism, drugs, divorce, explicit sexual awakening, pop culture, and the possibly supernatural, but an open heart anchors the work.

A warmly off-kilter coming-of-age story that evokes more than it explains.