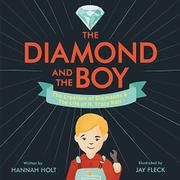 THE DIAMOND AND THE BOY

The Creation of Diamonds & the Life of H. Tracy Hall

In two, parallel free-verse narratives, Holt tells the stories of both the creation of natural diamonds and the invention of synthetic diamonds. Versos detail how diamonds are naturally produced and harvested: “Mighty, unyielding, brilliant. / The rock would dazzle if it had / any light to reflect, / but it doesn’t. / A crystal, even a priceless one, / is still only a lump / in the dirt / until it is found.” The recto shares the life of H. Tracy Hall (Holt’s grandfather) from his childhood through his invention of his diamond-producing machine: “Mighty, unyielding, brilliant. / His inventions dazzle classmates. / But Tracy is still penny poor, with so / many ideas floating just out of reach. / … / Even a genius must eat and sleep / before his dreams can be found.” The parallel narrative structure is a compelling one, although occasionally the technique slows the momentum of one or both of the narratives. Illustrator Fleck uses full-bleed spreads of bold colors and simple lines, rendered with pencil and digitally, to effectively emphasize the scope and significance of both creations, cannily varying the palette to emphasize the parallel structure.