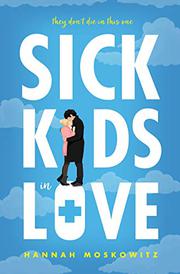 Two chronically ill teens navigate the joys and pitfalls of a relationship in this YA contemporary romance.

Of all the places where 16-year-old Isabel Garfinkel could meet a cute boy, the Ambulatory Medical Unit at Linefield and West Memorial Hospital in the Queens borough of New York City, wouldn’t seem the most likely. It’s her second time in the “drip room,” as it’s called, where she gets monthly infusions to treat the rheumatoid arthritis that she’s had for 11 years. This time, though, she can’t help staring at a new patient there—a boy her age named Sasha Sverdlov-Deckler. She likes his quirky, appealing looks and wry sense of humor, and they bond over the fact that they’re both Jewish. Sasha has a rare genetic disorder called Gaucher disease, which isn’t fatal, in his case, but causes severe anemia, weak bones, and other problems. Although Isabel has several close and well-meaning friends, she doesn’t have anyone who really understands what it’s like “to deal with the everyday slog of being sick.” She and Sasha hit it off, but she’s emotionally guarded and dislikes risks, and as a result, she doesn’t date. Sasha is patient and sweet, and their romance grows; amid a few arguments and setbacks, they forge a bond that gets them through their problems. As the advice columnist for her high school paper, Isabel asks questions and gathers others’ responses; by the end of the novel, she’s comfortable with not having all the answers. Moskowitz (Salt, 2018, etc.) does a splendid job of showing what the world looks like to the chronically but invisibly ill. For example, Isabel is often tired and aching, and she fears the judgment of others; she notes that even her physician father would question her getting a cab to go 15 blocks, a walkable distance for many, including people who are old or pregnant and “people with arthritis who are just better than me.” Overall, the excellent character development lends depth and sweetness to the romance. Isabel’s relationship with Sasha helps her fight self-doubt and stand up for herself with laudable vigor, yet the novel never feels didactic.