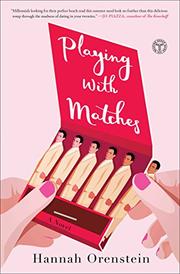 A young woman gets a job with an exclusive matchmaking service in Orenstein’s debut.

Sasha Goldberg is a recent college graduate in New York City with a gorgeous finance-bro boyfriend and a roommate who’s her best friend. The one thing she needs? A job. When she applies to work at Bliss, an elite matchmaking service that finds love for its superexclusive, rich, and successful clientele, it seems like fate. She knows what happens when a relationship is a bad match—her mother was a Russian mail-order bride, and her parents divorced when Sasha was a child. Sasha’s certain she can help people find a better match than the one her parents had, and soon she’s knee-deep in the world of the New York dating scene. She learns that finding dates for picky businesspeople is harder than she thought it would be—but then she discovers the unthinkable. Her boyfriend, whom she’d always assumed was just working late, has actually been on Tinder behind her back. She breaks up with him and, in her despair, breaks the one rule Bliss has—she asks out a client. She’d set Adam up with another Bliss client, but since the two of them didn’t hit it off, what’s the harm in going out with him herself? Soon, Sasha is juggling her secret new relationship and her clients’ dating lives. But as her ex tries to win her back and her relationship with Adam gets more serious, things start to get complicated. Will Sasha stick with her old flame, or will she strike out on her own? Orenstein’s writing style is simple, but the plot is engaging enough that readers will find themselves flying through the pages to find out what decisions Sasha will make. Refreshingly, the ending hits a note of realism and refuses to tie things up with a bow.

A fun, fast read about dating in the city.