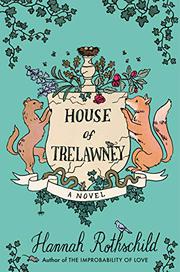 An eccentric family of British aristocrats, their decaying ancestral home, and the financial crash of 2008 are the ingredients of Rothschild's (The Improbability of Love, 2015, etc.) romantic/comic fairy tale.

Downton Abbey has nothing on 800-year-old Trelawney Castle with its four miles of hallways, a room for each day of the year, and 85 members of staff. But that was in its heyday. Now Kitto, the future 25th Earl of Trelawney, is on his financial uppers, presiding over a freezing, crumbling semi-ruin. His wife, Jane, has sunk her own money into the castle but is still struggling to feed herself, their three children, and Kitto’s aging parents, the current earl and countess. Kitto’s sister Blaze, a talented stock picker at a London hedge fund, does have some money, but her company has just been bought by ruthless opportunist Thomlinson Sleet, which puts her in jeopardy. The plot starts to move when Jane and Blaze receive letters from their old college friend Anastasia, now dying and asking them to care for her daughter, Ayesha. The banking crisis swallows Kitto’s remaining money, and Jane kicks him out. After a family death, Blaze comes to the castle’s rescue, although she's distracted by an on-and-off love affair with much nicer hedge fund squillionaire Joshua Wolfe. Rothschild writes well about these elite milieus, but hers is a broad, pantomime-ish tale stocked with simple, one-dimensional characters: flabby villain Sleet; indefatigably decent, endlessly deferred Wolfe; tirelessly sneery oldest son Ambrose. The flow is uneven—Kitto disappears for half the story; Blaze is exhaustingly inconsistent—and the book is both long and weakly paced. Trelawney does, however, finally get the upgrade it needs, and its dysfunctional family may be positioned for a sequel.

Deft narration fails to eclipse the inherent shortcomings in this patchy satire of entitlement (literally) with sentimental touches.

THE IMPROBABILITY OF LOVE
by Hannah Rothschild
Nonfiction