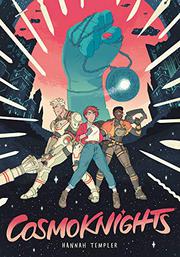 From the Cosmoknights series, volume 1

The night Pan helps Princess Tara evade a forced marriage by escaping the planet, she loses the one friend she ever had. Five years later, she is helping her mechanic father in the shop and groaning as the men watch tournaments on TV—this is outer space, so the jousts happen with high-tech spacesuits, not horses, though the prize is still marriage to the planet’s princess for the cosmoknight’s sponsor. The night after one particularly gruesome battle, a lesbian couple arrives at Pan’s doorstep, asking for her doctor mother’s help. Pan figures out that the wounded woman is a cosmoknight, accompanied by her wife, but what really shocks her is their secret: When they win, they whisk the princess away to freedom. That’s all it takes for Pan to stow away on their spaceship to join them. At first they are angry, but she proves her worth at the next joust. The jewel-toned, full-color illustrations use different palettes to mark flashbacks, fights, and the present day but can still be confusing. Pan’s journey to recognizing her own worth and identity as a feminist is earnest and believable. To say the book ends on a cliffhanger is charitable; the conclusion is incredibly abrupt. Pan and the knight are white; her wife and Princess Tara are black.

While the plot feels too unfinished for publication, readers will enjoy the ride.