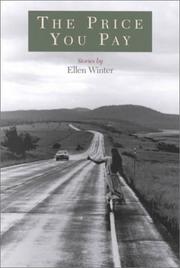 THE PRICE YOU PAY

Peopled by drifters, loners, pot dealers and dreamers, these 16 stories about men and women trying to connect are more lyrical and perhaps more forgiving than Pam Houston’s western tales, if not as amusing. Pickup trucks and junk cars transport the characters from unwanted pasts to uncertain futures. Dogs large and small wander through the pages, often providing a steadfast contrast to the transient and inexplicable actions of the human characters, sometimes falling victim to those actions. In her strongest efforts, Winter brings original and daring twists to her themes: “The Price You Pay” is more than your usual girl-hitchhiker-picked-up-by-older-guy tale; “Pretty Please” is a remarkably artful gender-bender, and “Contra Dance” is far richer and wiser than most romantic-triangle dramas. There are also finely honed stories of understated menace and suspense, such as “The Boys” and “Call Me Ruby.” The author is refreshingly sympathetic toward all her characters, of both sexes, and can write convincingly from a masculine point of view (as in “The Planting,” a guy’s-gotta-go story), though sometimes her male narrators seem a bit too lyrical, too dreamy—too good to be believed (“Love In The Desert” comes to mind). She writes about sex directly, but with poetic restraint, and she evokes the sere, empty beauty of the desert with an admirable eye for detail. Except for the occasional labored metaphor, the prose is tight, spare, and lyrical.

Winter’s view of life on the margins is clear-eyed and unsentimental, yet the stories often end with grace notes of hope or affirmation. A promising new talent.