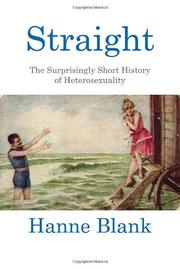 The Surprisingly Short History of Heterosexuality

Independent scholar Blank, a social historian who has written extensively on sexual subjects (Virgin: The Untouched History, 2007; Big Big Love: A Sourcebook on Sex for People of Size and Those Who Love Them, 2000), turns her attention to changing attitudes toward mainstream sexual identity.

She begins with the startling information that the term heterosexuality was invented as an identifying category in 1869. Until then, the term “sodomy” was used to describe proscribed sexual relationships outside of marriage—the presumption being that the purpose of a proper sexual relationship was procreation. In this chronicle of changing sexual mores, the author challenges the common preconception today that the distinction between homosexuality and heterosexuality is legitimate. Beginning on a personal note, Blank reveals the circumstances of her own long-term partnership with a person whose genetic structure is anomalous—his sex chromosome is XXY rather than XX or XY—something he only found out belatedly since to all appearance he was a typical male, albeit with an absence of facial hair. The author explores the various ways that our beliefs about biological sex and gender have varied historically and why, in her opinion, they are still confused. Patterns of appropriate behavior have changed radically from the 19th century, when lawyers typically shared a bed when they rode the circuit without any implication of impropriety. While women since then have increasingly gained equality politically and in the workplace, only very recently has that autonomy extended to the bedroom. Blank uses the case of erectile dysfunction to illustrate a hidden meaning of heterosexuality today: In “the model of pleasure that Viagra is marketed to serve…Viagra-fueled erections are intended for vaginal penetration…the only fully legitimate source of sexual pleasure for most of Western history.” Moreover, homosexual “men who take the insertive role of sex with other men are likely to be perceived as more masculine and sexually respectable” than their passive counterpart. The author uses wisdom and wit to substantiate her contention that love and passion are not definable by biology.