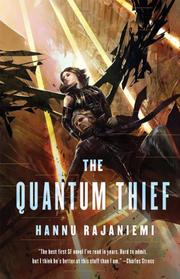 Notorious thief Jean le Flambeur serves an indeterminate sentence in the surreal Dilemma Prison governed by artificial intelligences, or Archons, at the behest of Earth's ruling "upload collective" called the Sobornost. The Archons' notion of rehabilitation is to compel the prisoners, incarcerated in infinitely repeating transparent cells, to play murderous mind games with infinite copies of themselves. Soon enough, though, along comes spacer Mieli in her alluring sentient spaceship to rescue le Flambeur—providing that he's willing to work for her. The thief has little choice, it's either accept or stay and be shot through the head over and over. And so they're off to Mars, where the multi-legged city of Oubliette wanders the landscape, terraforming as it goes. Here, time itself is currency; memory, and hence reality, is held collectively, privacy is a fetish preserved by unbreakable encryption and enforced by powerful "tzaddiks," but everybody's strings are being pulled—even the string-pullers'—by hidden higher authorities. Mieli's employer, known only as the pellegrini, wants le Flambeur to perform a particular if unmentioned service, while the thief has his own ulterior motives for cooperating: years ago he hid large chunks of his memories here, and now he needs to recover them to attain his own vengeful goals. Meanwhile, brilliant young detective Isidore Beautrelet, having just solved the murder of a prominent chocolatier, accepts another assignment—involving an arch villain named…le Flambeur. All this barely hints at the complex inventions and extrapolations, richly textured backdrop and well-developed characters seamlessly woven into a narrative stuffed with scientific, literary and cultural references.

Spectacularly and convincingly inventive, assured and wholly spellbinding: one of the most impressive debuts in years.