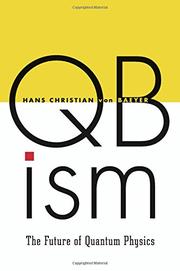 The Future of Quantum Physics

“There is a strangeness about quantum mechanics that is rooted not in its mathematical complexity but in the paradoxes and enigmas that have bedeviled it from birth.” Since that birth 90 years ago, scientists regularly explain quantum physics, in all its weirdness, to the general public. Here’s the latest.

As “a quantum mechanic in retirement,” von Baeyer (Emeritus, Physics/Coll. of William and Mary; Information: The New Language of Science, 2004, etc.), who has spent 50 years “teaching the subject in universities, operating its mathematical machinery in my research, and struggling to bring its message to the general public,” describes an ingenious new approach, QBism, that eliminates the paradoxes. Readers may have to take this on faith, but they will not regret the effort. Traditionally, quantum phenomena are measured by statistics. One can’t locate an electron; one can only determine the probability of finding it somewhere—anywhere in the universe. This oddity isn’t helped by the fact that traditional statistics says nothing about single events. Bayesian statistics (the “B” in QBism) include an observer who estimates the probability that data such as the precise location of the electron is true and then updates the probability when new information arrives. Using comprehensible analogies (none from physics), the author demonstrates how QBism eliminates quantum weirdness. Schrödinger’s famous cat is no longer both dead and alive as long as it remains unseen; the observer can calculate the odds that it’s one or the other. “QBism implies a radical change in perspective,” writes von Baeyer. “It turns the traditional top-down view upside down by offering a bottom-up depiction of the universe…[and] seeks to find the universal in particular personal experiences.”

QBism remains controversial, but scientifically inclined readers will share von Baeyer’s enthusiasm and come away with a feeling, if not a deep understanding, of quantum phenomena that doesn’t require suspension of disbelief.