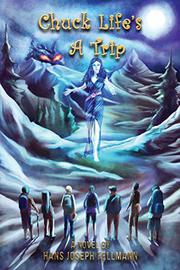 Seven friends set off on a raucous 12-week journey around Eurasia in Fellman’s debut novel.

Twenty-something Johan Felmanstein and his six friends form a tight-knit micro-community, complete with their own slang called “ROAST” (for “Result of a Small Town”), specific to Livermore, California (or “L-town”). “Gettin’ D,” for instance, is getting drunk; “lollin’ ” is smoking weed. Jonah’s partners in crime include Mason McKinney, ginger-bearded and often stoned; Tim Frazelli, who has a pet squirrel; Tim’s brother, Sebastian, who gets ill-considered tattoos; Bert Thompson, who adopts a fake Irish accent when he travels; Kip Zakynthos, who repeatedly gets his teeth whitened; and Chuck Sunday, who possesses the unique ability to lounge in any location. Since they were teens, they’ve loved to drink and get high together, and now that they’re older, they’ve added travel to the mix. (They call themselves “the Chucks,” after their most leisurely member, and refer to their traveling lifestyle as “Chuck life.”) They’re about to embark on a three-month journey across Europe and Asia: “for a group of hoodlums from a small town in the States, eighty-five days, fifteen countries, and two continents is a big deal,” narrates Johan. As they jet from place to place—getting drunk, chasing sex workers, and saying words like “gaht,” (“comrade”), “grooge” (“go”) and “garnk” (“not all that great”)—the boys get to know each other in ways they never have before. They’ll get back home with stronger bonds and a greater sense of the world—if they don’t get each other killed along the way.

The ensuing trip features some memorable bits of incidental partying in romantic locales, as when the boys sample absinthe while listening to a Roma band in Český Krumlov in the Czech Republic. However, the work fits firmly into genre of “fratire”; the guys are boorish, profane, homophobic, misogynistic, and motivated purely by hedonistic instincts. What’s more, their ROAST slang—reminiscent of Nadsat from Anthony Burgess’ A Clockwork Orange, but less interesting and entirely too pleased with itself—makes every conversation difficult to get through: “ ‘You have been kinda garnk,’ I said. [Bert said,] ‘I know. I just hella feel like my relationship with my other friends in L is gettin’ ’em. Fools respond mad to my emails.’ ” Fellman writes in a preface that the novel is based on a real trip that he and his friends took in 2006, and it shows, as it doesn’t have the sort of narrative arc that one expects from fiction. Instead, it feels much more like the sort of protracted bar story that one of the boys might tell back in Livermore—where, Jonah implies, they and their exploits are already legendary. The author attempts to make Jonah and his friends seem cool, but everything about the book, from the preface to the 20-page appendix about ROAST, feels showy and forced. It all feels like a throwback to an earlier era, in the least pleasant way.

A rambling novel about an unpleasant crew taking their inside jokes abroad.