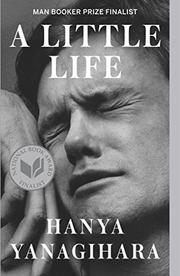 Four men who meet as college roommates move to New York and spend the next three decades gaining renown in their professions—as an architect, painter, actor and lawyer—and struggling with demons in their intertwined personal lives.

Yanagihara (The People in the Trees, 2013) takes the still-bold leap of writing about characters who don’t share her background; in addition to being male, JB is African-American, Malcolm has a black father and white mother, Willem is white, and “Jude’s race was undetermined”—deserted at birth, he was raised in a monastery and had an unspeakably traumatic childhood that’s revealed slowly over the course of the book. Two of them are gay, one straight and one bisexual. There isn’t a single significant female character, and for a long novel, there isn’t much plot. There aren’t even many markers of what’s happening in the outside world; Jude moves to a loft in SoHo as a young man, but we don’t see the neighborhood change from gritty artists’ enclave to glitzy tourist destination. What we get instead is an intensely interior look at the friends’ psyches and relationships, and it’s utterly enthralling. The four men think about work and creativity and success and failure; they cook for each other, compete with each other and jostle for each other’s affection. JB bases his entire artistic career on painting portraits of his friends, while Malcolm takes care of them by designing their apartments and houses. When Jude, as an adult, is adopted by his favorite Harvard law professor, his friends join him for Thanksgiving in Cambridge every year. And when Willem becomes a movie star, they all bask in his glow. Eventually, the tone darkens and the story narrows to focus on Jude as the pain of his past cuts deep into his carefully constructed life.

The phrase “tour de force” could have been invented for this audacious novel.