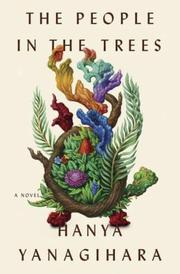 THE PEOPLE IN THE TREES

An instance of that rare subgenre of literature, the anthropological novel, in which Norton Perina, winner of the Nobel Prize in medicine, traces the early part of his life, when he helped both discover and destroy a lost tribe.

Yanagihara does everything she can to establish verisimilitude in this novel, so much so that the reader will be Googling names of characters to see if they’re “really real.” The movement toward ultrarealism extends to footnotes and an appendix provided by Ronald Kubodera, whose friendship with Perina extends even into the sad period when the Nobel Prize winner was convicted of sexual abuse involving some of the tribal children he brought back with him. Kubodera provides a preface in which he vigorously defends Perina, and then the narrative is turned over to Perina’s memoirs, which take us back to his Midwestern upbringing, his rivalry with his brother Owen, his graduation from Harvard Medical School and almost immediate hire by the anthropologist Paul Tallent. Along with his assistant Esme Duff, Paul takes Perina to U’ivu, a constellation of remote islands in the South Pacific. Perina becomes immediately fascinated with Ivu’ivu, an island that harbors a small tribe, a number of whom are well over 100  years old. Perina traces this longevity to the eating of an opa’ivu’eke, a sacred turtle whose meat is consumed in certain ritualistic practices. Determined to find out the secret of immortality, Perina brings back three Ivu'ivuian "dreamers" with him and smuggles an opa’ivu’eke into his lab at Stanford.

Yanagihara presents a cautionary tale about what can happen when Western arrogance meets primeval culture.