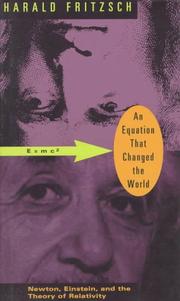 AN EQUATION THAT CHANGED THE WORLD

Newton, Einstein, and the Theory of Relativity

The fundamentals of Einstein's theory of special relativity, presented in the form of a series of imaginary dialogues among scientists of three different eras. Fritzsch (Max Planck Institute for Physics, Munich; Quarks: The Stuff of Matter, 1983) begins by sending a fictitious modern physicist, Adrian Haller, to England, where he meets Sir Isaac Newton, who has been returned to Earth. Newton is curious about developments in physics since his day, and the two men spend several chapters discussing Newton's concepts of space, time, and light. When the conversation arrives at the subject of Albert Einstein's contributions to science, Newton persuades Haller to take him for a visit to Bern, Switzerland, where they meet the father of relativity. The three physicists then engage in a series of dialogues on how Einstein modified Newton's ideas of the universe, and on how modern science has both verified and extended Einstein's own theories. While there is an unavoidable kernel of mathematics in any discussion of physical concepts, the derivation of Einstein's famous equation, E = mc2, should be within the grasp of anyone who passed high school algebra. The key ideas are presented clearly, and the discussion touches on such subjects as the source of the sun's energy, the future of nuclear and fusion power, antimatter, and the decay of the proton. Fritzsch's handling of the dialogues and of the flimsy narrative framework does not suggest that he should take up fiction as a career. But the ideas come across clearly, even entertainingly, in spite of what appears to be a rather pedestrian translation. Occasionally stiff, but always readable; a good introduction to modern physics for any reader willing to invest a little thought in the subject. (45 halftones, 41 line drawings, 1 table)