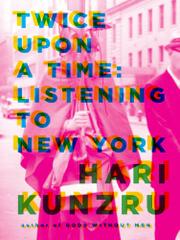 TWICE UPON A TIME

A visionary e-book exploring the medium’s multimedia possibilities while offering meditations on the sounds of New York and the life and work of the late street composer Moondog.

Though Kunzru has earned international acclaim for his novels (Gods Without Men, 2012, etc.), he has never written anything quite like this—and neither has anyone else. In fact, “written” might be the wrong word, for this melding of sense, sound and illustration might as well be described as having been constructed, designed or curated. The content of the 6,200-word “immersive essay” can’t be separated from the way readers apprehend the words on the screen. Often, a page of text reveals itself in sections, with different typography, all the while accompanied by the sounds of the city and the percussion of Moondog. As a newcomer to the city transplanted from England, Kunzru chose Moondog as his guide, notwithstanding the fact that the musician was blind and had died in 1999. The author, whose brother is blind, thought that what some might see as a handicap could be a virtue: “The blind develop an appreciation for precision, repetition, knowability.” Though Moondog left New York in 1974 for Germany, his music, influence and legacy live on. As someone who once lived in the spare room of composer Philip Glass and performed with musicians as disparate as Charlie Parker, Peter Seeger and Tiny Tim, the composer and percussionist embodied something essential and ineffable about New York for the newcomer. Kunzru’s meditation reflects not only what remains of Moondog’s legacy, but what has changed so profoundly over the city’s subsequent decades. This work reflects the experience of Kunzru’s first six months in the city, six years ago; he has now married and moved to Brooklyn.

An aural and visual immersion like no other, showing the dimensions that “books” can explore onscreen that they can’t in print.