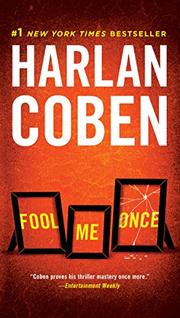 Coben (The Stranger, 2015, etc.) hits the bull’s eye again with this taut tale of a disgraced combat veteran whose homefront life is turned upside down by an image captured by her nanny cam.

Recent widows can’t be too careful, and the day she buries the husband who was shot by a pair of muggers in Central Park, Maya Burkett installs a concealed camera in her home to keep an eye on Lily, her 2-year-old daughter, and her nanny, Isabella Mendez , while she’s out at her job as a flight instructor. She’s shocked beyond belief when she checks the footage and sees images of her murdered husband returned from the grave to her den. Confronted with the video, Isabella claims she doesn’t see anything that looks like Joe Burkett, then blasts Maya with pepper spray and takes off with the memory card. Should Maya go to the police? They were no help when her sister, Claire, was killed in a home invasion while she was deployed in the Middle East, and she doesn’t trust Roger Kierce, the NYPD homicide detective heading the investigation of Joe’s murder. Besides, Maya’s already juggling a heavy load of baggage. Whistle-blower Corey Rudzinski ended her military career when he posted footage of her ordering a defensive airstrike that killed five civilians, and she’s just waiting for him to release the audio feed that would damage her reputation even more. So after Kierce drops a bombshell—the same gun was used to shoot both Joe and Claire—Maya launches her own investigation, little knowing that it will link both murders to the death more than 10 years ago of Joe’s brother Andrew and the secrets the wealthy and powerful Burkett family has been hiding ever since.

Once again, Coben marries his two greatest strengths—masterfully paced plotting that leads to a climactic string of fireworks and the ability to root all the revelations in deeply felt emotions—in a tale guaranteed to fool even the craftiest readers a lot more than once.