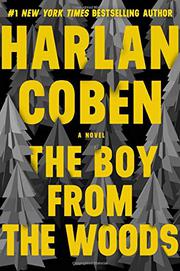 THE BOY FROM THE WOODS

Coben’s latest darkest-suburbs thriller sets a decidedly offbeat detective on the trail of a crime with overtones unmistakably redolent of once and future presidential elections.

Wilde is called Wilde because nobody’s known his real name from the moment a pair of hikers found him foraging for himself in Ramapo Mountain State Forest 24 years ago. Now over 40, he’s had experience as both a lost boy and a private investigator. That makes him an obvious person to help when his godson, Sweet Water High School student Matthew Crimstein, expresses concern to his grandmother, attorney Hester Crimstein, that his bullied classmate Naomi Pine has gone missing. Matthew doesn’t really want anyone to help. He doesn’t even want anyone to notice his agitation. But Hester, taking the time from her criminal defense of financial consultant Simon Greene (Run Away, 2019) to worm the details out of him, asks Wilde to lend a hand, and sure enough, Wilde, unearthing an unsavory backstory that links Naomi to bullying classmate Crash Maynard, whose TV producer father, Dash Maynard, is close friends with reality TV star–turned–presidential hopeful Rusty Eggers, finds Naomi hale and hearty. Everything’s hunky-dory for one week, and then she disappears again. And this time, so does Crash after a brief visit to Matthew in which he tearfully confesses his guilt about the bad stuff he did to Naomi. This second disappearance veers into more obviously criminal territory with the arrival of a ransom note that demands, not money, but the allegedly incriminating videotapes of Rusty Eggers that Dash and Delia Maynard have had squirreled away for 30 years. The tapes link Rusty to a forgotten and forgettable homicide and add a paranoid new ripped-from-the-headlines dimension to the author’s formidable range. Readers who can tune out all the subplots will find the kidnappers easy to spot, but Coben finds room for three climactic surprises, one of them a honey.

Now that Coben’s added politics to his heady brew, expect sex and religion to join the mix.