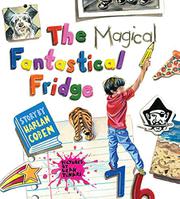 When his mother instructs him to set the table for an extended family dinner, Walden rebels; he’d rather have an adventure than deal with boring relatives.

Walden gets his wish when one of his crayon drawings sucks him into the art on the fridge. Hopping from one bit of refrigerator detritus to the next, he moves through coupons, photographs, ads, and more, eventually escaping with a better appreciation for home. The narrative is composed primarily of Walden’s expository exclamations as he moves from ticket stub to birthday invitation and beyond. The intention here appears to be to inspire kids to use what’s stuck on their own home fridges to create their own adventures. Yet Walden’s travels are so arbitrary and without plot that when at last he escapes the fridge, the statement that home with family is “the best PLACE in the WHOLE WORLD” is unearned. Debut artist Tinari, whose art Coben discovered on the wall of one of his favorite restaurants, brings to the book a wild sensibility; she’s unafraid to toy with panels, styles, and narrative jump-cuts, and the text is hand-lettered, with frequent and distracting changes in style. Readers may occasionally have difficulty connecting to her figures, since they do not always resemble one another from one page to the next.

He may be a master of suspense, but the only mystery surrounding Coben’s first foray into picture books may be why he wrote such a convoluted hodgepodge.