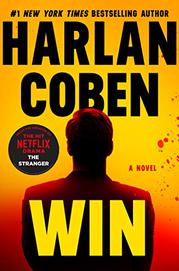 Memo to fans who’ve longed for Windsor Horne Lockwood III, the moneyed, omnicompetent buddy of sports agent Myron Bolitar, to snag a starring role of his own: Beware what you wish for.

Nothing would connect privileged Win with the murder of the reclusive tenant of an exclusive Upper West Side building if the police hadn’t found a painting inside Ry Strauss’ apartment—a Vermeer belonging to Win’s family that was stolen long ago while on loan to Haverford College—along with a monogrammed suitcase belonging to Win himself. The two discoveries tie Win not only to the murder, but to the Jane Street Six, a group of student activists Strauss led even longer ago. The Six’s most notoriously subversive action, the bombing of an empty building in 1973, left several innocents accidentally dead and the law determined to track down the perps. But except for Vanessa Hogan, whom Billy Rowan tearfully visited soon after the bombing to beg her forgiveness for his role in bringing about the death of her son, no one’s seen hide nor hair of the Six ever since. The roots of the outrage go even deeper for Win, whose uncle, Aldrich Powers Lockwood, was killed and whose cousin, Patricia, to whom he’d given that suitcase, was one of 10 women kidnapped, imprisoned, and raped in an unsolved crime. These meaty complications are duly unfolded, and gobs of cash thrown at them, by the ludicrously preening, self-infatuated Win, who announces, “It’s good to be me,” and “I can be charming when I want to be.” As if.

Densely plotted and replete with incident if you can overlook the insufferable narrator.