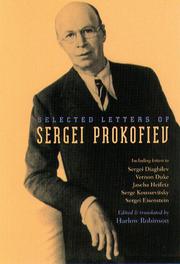 An entertaining and useful selection of Prokofiev’s correspondence with prominent figures in Soviet and ÇmigrÇ art, dance, and music circles that brims with the composer’s personality and literary style. After reading but a few of Prokofiev’s letters (appearing in English for the first time), one can easily agree with Robinson’s suggestion that, had he not become a composer, Prokofiev might have turned to writing. He did write opera librettos, but the letters in this collection are especially revealing of the private man—a witty and ironic, though harsh, friend, a tireless worker, and an energetic man of business. Among those included in this selection of business letters (many about artistic collaborations), travel reports, and friendly notes are figures in the music world (Serge Koussevitsky, Nikolai Miaskovsky), the director Sergei Eisenstein, Ballets Russes director Sergei Diaghilev, and theater director Vsevolod Meyerhold. The list is a virtual who’s who of the Soviet artistic elite, and many letters shed light on the nature of Prokofiev’s artistry and his personality. Robinson, the author of a 1987 biography of the composer, also provides useful introductions to each chapter. His comments are unsentimental and even brutally candid. Describing the composer’s egotism and his mocking manner, he writes: —Empathy and compassion were never strong traits in Prokofiev’s character.— Robinson has published these letters in an effort to help save Prokofiev’s reputation from those (especially post—Cold War Russians) who condemn his —collaboration— with the Soviets. The letters, he argues, provide proof for his earlier claim that Prokofiev lacked political views. While they confirm that music was his raison d’àtre, they also indicate that, while Prokofiev chose to distance himself from politics, he was not ignorant of them. A valuable and accessible resource for musicologists, Soviet specialists, and those seeking greater insight into Prokofiev’s life and art. Readers should, however, make up their own minds about his politics.