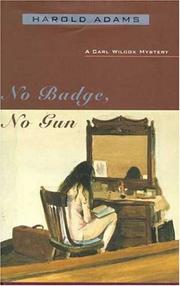 NO BADGE, NO GUN

This summer, Carl Wilcox (The Ice Pick Artist, 1997, etc.) is painting signs in Jonesville, South Dakota, when pastor Bjorn Bjornson asks him if he can find out who raped and strangled his teenaged niece, Gwendolen Westcott, in the church basement. (It’s a vintage Depression-era deal: the pastor offers to reimburse Carl for any income he loses from his sign-painting, and promises a bonus of $100 for results.) Gwendolen’s school friends, girls and boys alike, seem far too innocent for the role of sex killer; the obvious suspect, charismatic Bible teacher Chris Kilbride, was settling his father’s estate back in North Dakota at the time of the murder. So the killer could be anybody, but that suits Carl, who’s always looking to meet new people anyway. The big surprise in Carl’s small-town rounds this time is the standout in the cast, school librarian Hazel Warford, who kindles a fire in Carl that just might lead him to the altar—if her possessive husband Derek, who thinks he’s a lot less estranged from Hazel than she does, doesn’t arrange the same sort of accident for Carl that he did for Hazel’s last beau. As usual, the apparently flat surface hides surprising depths of passion. Adams’s greatest challenge may lie ahead, though, if he plans to get rolling-stone Carl to settle down for keeps.