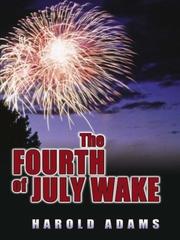 THE FOURTH OF JULY WAKE

A year and a half after marrying ex-nurse Sorah, three months after leaving his body to the University of Minnesota Hospital and his fortune to Sorah, P.J. Krueger dies of an apparent heart attack. What could be more natural than the death of a 64-year-old in bed with his 24-year-old wife? Even so, P.J.’s daughter Marcia, stung less at being disinherited than at being replaced as the family’s queen bee, insists that Sorah somehow murdered the old goat. At the “memorial party” Sorah’s organized in lieu of the funeral P.J. forbade, fuming Marcia asks Kyle Champion, the former TV news reporter and anchor turned private eye who’s come at the invitation of Marcia’s brother Matt, to prove the charge. But it won’t be easy, since the party—part wake, part family reunion—is crawling with relatives and hangers-on who had their own reasons for wanting their father, father-in-law, or ex-lover dead. As if suspicion isn’t scattered generously enough, Kyle (When Rich Men Die, 1987) will also have to deal with three comely, forbidden ladies all intent on turning his head and with the ghostly apparition of a loony neighbor whose alleged death in a bus accident hasn’t stopped him from popping up, armed with a hatchet, just when things are getting friendly between Kyle and one of those ladies.

Shorn of the understated period background that frames Adams’s trademark hero, Depression-era itinerant Carl Wilcox (Lead, So I Can Follow, 1999, etc.), this decorous hothouse gossipfest lumbers as interminably as the house party from hell.