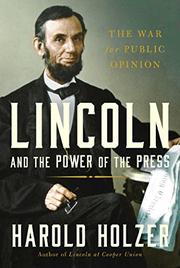 LINCOLN AND THE POWER OF THE PRESS

The War for Public Opinion

Lincoln knew the power of the press (“public sentiment is everything,” he declared in 1858), and he made sure his views were published in supportive journals and even secretly purchased the newspaper for the German-American community in Springfield, the Illinois Staats-Anzeiger. In this engaging history of one of the most divisive periods in American politics, the buildup to the Civil War, Lincoln historian Holzer (The Civil War in 50 Objects, 2013, etc.) tracks how the great political clashes played out in the lively press of the day, creating not-so-delicate marriages between politicians and the journalists writing the “news” (which was more opinion than actual news). From the early penny presses emerged the New York Herald, published by the formidable Scotsman James Gordon Bennett, a scandalmonger and disputatious contrarian who regularly skewered both parties, Democratic or Whig (Republican), while remaining anti-abolition and a fierce critic of Lincoln; the New York Tribune, founded by Horace Greeley, crusader for faddish causes from utopian socialism to gender equality, who regularly ran for office and both supported Lincoln and later tried to unseat him; and the New York Times, established by Henry Jarvis Raymond as a “mean between two extremes,” promising a more “sober” and “mature” approach yet unabashedly pro-Lincoln, especially as Raymond became head of the Republican Party. The newspapermen bristled at the others’ successes and unloosed competitive salvos in their respective pages over the Mexican War, the Fugitive Slave Act, the Compromise of 1850, the roaring 20-year rivalry between Stephen Douglas and Lincoln, John Brown’s raid on Harpers Ferry—and, especially, the contentious presidential elections of 1860 and ’64. Other regional newspapers establishing fierce positions on slavery struggled for survival, such as William Lloyd Garrison’s The Liberator and Frederick Douglass’ Paper (later Monthly).

An exhaustive feat of research with a focused structure and robust prose.