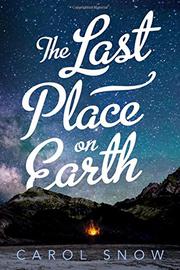 THE LAST PLACE ON EARTH

Most of the time, “the world is ending” is a metaphor. But what if it really is ending?

At first, Daisy thinks Henry, her best friend, is just playing sick, as he often does. But when he doesn't return her texts, she gets worried—especially when there's no sign of him or his parents in their house. Where is Henry? And does this have anything to do with how he almost kissed her the night before he disappeared? Daisy needs to know, so she breaks into Henry's house and finds a note in his room, a note with only two words: “SAVE ME.” And so Daisy sets out on a journey to save the best friend who might be more than just her best friend, a journey that means spending a week in quarantine, discovering a world of doomsday preppers, learning about the Madagascar plague, and asking if this really is the end of the world. But facilely, Daisy and Henry learn that no matter how many things change, “life goes on as before.” The doomsday elements of the plot make for a jarring addition to what seems to be an ordinary friends-to-lovers story. Still, the characters, in particular Daisy, are well-drawn, and the topic is certainly of interest.

Though the story is not particularly cohesive, its characters carry the day. (Fiction. 14-18)

THE WAY WE FALL
by Megan Crewe
Children

THIS WORLD WE LIVE IN
by Susan Beth Pfeffer
Children

ALL THESE THINGS I'VE DONE
by Gabrielle Zevin
Newsletter sign-up