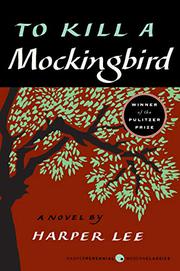 TO KILL A MOCKINGBIRD

A first novel, this is also a first person account of Scout's (Jean Louise) recall of the years that led to the ending of a mystery, the breaking of her brother Jem's elbow, the death of her father's enemy — and the close of childhood years. A widower, Atticus raises his children with legal dispassion and paternal intelligence, and is ably abetted by Calpurnia, the colored cook, while the Alabama town of Maycomb, in the 1930's, remains aloof to their divergence from its tribal patterns. Scout and Jem, with their summer-time companion, Dill, find their paths free from interference — but not from dangers; their curiosity about the imprisoned Boo, whose miserable past is incorporated in their play, results in a tentative friendliness; their fears of Atticus' lack of distinction is dissipated when he shoots a mad dog; his defense of a Negro accused of raping a white girl, Mayella Ewell, is followed with avid interest and turns the rabble whites against him. Scout is the means of averting an attack on Atticus but when he loses the case it is Boo who saves Jem and Scout by killing Mayella's father when he attempts to murder them. The shadows of a beginning for black-white understanding, the persistent fight that Scout carries on against school, Jem's emergence into adulthood, Calpurnia's quiet power, and all the incidents touching on the children's "growing outward" have an attractive starchiness that keeps this southern picture pert and provocative. There is much advance interest in this book; it has been selected by the Literary Guild and Reader's Digest; it should win many friends.