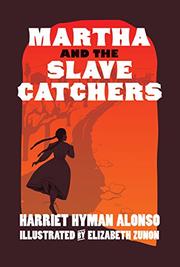 MARTHA AND THE SLAVE CATCHERS

The life of a Connecticut girl is turned upside down by the Fugitive Slave Act.

In her debut for young readers, Alonso introduces readers to a bandaged and badly bruised 14-year-old Martha Bartlett as she reads a letter from her white abolitionist father, an Underground Railroad “station keeper,” about her ailing mother, a white Quaker who helps him. Readers learn how Martha received her injuries in a flashback that begins with the arrival of her adopted brother, Jake, the infant free son of a runaway, possibly mixed-race teenager named Mariah and her slave owner, when Martha was 6. Jake’s origin and what readers will likely see as autism challenge his family’s love and communal concern as they all create a web of lies and other safeguards to protect him. When Martha unintentionally leaves Jake, now 7, alone, slave catchers kidnap the boy and take him back to Maryland. Martha—spurred by her own guilt, the shocking revelation about her own beginnings, and the attendant casual racism regarding her birth that romantically devastates her—decides to cross the Mason-Dixon Line to bring Jake home. Alonso pens an informative, easy-to-follow adventure story that nevertheless tackles the persistent issues arising from antebellum America, including race and skin color, situational ethics and their devastating consequences, and allyship and using privilege for justice.

A tense adventure about interracial adoption that gets to the heart of what’s most important: love.