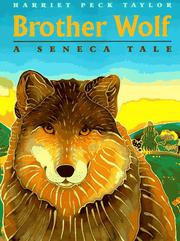 The rippling hues of batik lend color and clarity to a child-friendly adaptation from Seneca folklore. The conflict between Wolf and Raccoon is playful, but sometimes their teasing goes too far. On this occasion, Raccoon plasters mud over the sleeping wolf's eyes, and Wolf wakes thinking he is blind. After having the plaster pecked off by his bird friends, he gets his revenge by rolling Raccoon down a hill in an empty tree trunk. Wolf rewards the birds by painting them beautiful colors. Any retelling, in a glutted field, must have something to distinguish itself from the pack. Taylor exhibits the necessary originality and winsomeness to do just that, without deviating too far from traditional folk art styles. Anyone who has camped in raccoon country knows the accuracy of the critter's depiction as a prankster; details in the text, such as Raccoon's rolling on his back, show Taylor's knowledge of the animal kingdom and bring honesty to the tale. (Picture book/folklore. 4-8)