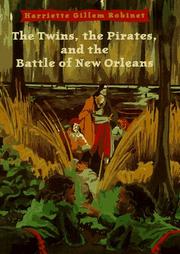 THE TWINS, THE PIRATES, AND THE BATTLE OF NEW ORLEANS

An exciting and unusual story about runaway slaves. Twins Pierre and Andrew have been rescued from slavery by their father, who left them in a wonderful three-story treehouse that he built in the swamps outside New Orleans and who has gone back to the estate where they were enslaved, to also rescue their mother and sister. When he doesn't return, the twins face the possibility that he is dead. They open his trunk and discover that he was one of Jean Lafitte's pirates; soon they are involved in a plan with Lafitte and Andrew Jackson to aid the Americans in the upcoming battle of New Orleans, and to rescue their family and friends from slavery. Robinet (Washington City Is Burning, 1996, etc.) evokes a vivid swamp setting, interweaves the twins' survival story and historical events, and limns the difficult relationship of the twins, who have been played against each other by a cruel master. Young readers will relish the marvelous details of their diet (in which live snails play a large part), their adventurous expeditions across the swamps, often by swinging on ropes, and many other fascinating features of their unconventional life. (map, glossary) (Fiction. 8-12)