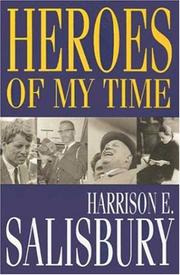 HEROES OF MY TIME

Former New York Times reporter Salisbury (The New Emperors, 1992, etc.) profiles 25 individuals who have won his admiration. Nearly all the sketches are crisp and effective, but some subjects seem capriciously chosen, failing the author's own criteria: courage. Salisbury has chosen some figures who, though obscure to most readers, seem to have led exemplary lives—including Deng Pufang, who's used his position as son of China's current ruler to change his nation's attitudes about the physically disabled; Sue and Lawrence Brooks, a New England judge and his wife who tirelessly spoke out for civil rights in the US; and Sister Huang Roushan, a nun who for five decades has worked with China's despised lepers. The author is also drawn to those who exude edgy intelligence, energy, or capacity for growth, including Malcolm X, Robert Kennedy, Solzhenitsyn, and David Halberstam—and these sketches crackle with life (RFK was ``hard eyed, hard faced, hard minded, and thin lipped....I was certain his quick eyes did not miss a thing nor his ears a word''). Salisbury also reveals some surprising facts from his Times years, such as that then-city editor A. M. Rosenthal forbade any mention of Malcolm X in the newspaper of record. But some of the author's subjects are bound to produce head-scratching regarding their bravery: Zhou En-lai's greatest assets, for instance, seem to have been the survival skills of a ``gentleman courtier,'' and Khrushchev talked a better game against his party apparatchiks than he played. And what are we to make of this summary of the achievement of Red Storm Over China author Edgar Snow?: ``Certainly Snow could not get Mao to reveal the negatives, to detail the bloodiness of the Long March, the slaughter of the landlords, the infighting with his Russian peers. But those are details.'' Details? Lively sketches of some of the most fascinating people of our time—though a few will remain ``heroes'' to Salisbury alone. (First printing of 25,000)