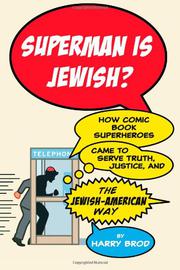 How Comic Book Superheroes Came to Serve Truth, Justice, and the Jewish-American Way

The question mark in the title of this ethnographic study by Brod (Philosophy and Humanities/Univ. of Northern Iowa; co-editor: Brother Keepers: New Perspectives on Jewish Masculinity, 2010, etc.) is, of course, rhetorical. The Hebrew descent of the Man of Steel has long been recognized—and not simply because his creators, Siegel and Shuster, shared it. The prototypical champion, flying in monogramed cape and red briefs worn outside his blue leotard, was, like many of his co-religionists, an immigrant, an alien from another planet. He wore a bespectacled, protective disguise. The superhero genre and the comic book itself, as Brod writes, were developed by Jewish artists and writers barred from other venues for their considerable talents. It’s telling that their protagonists almost always had split personalities. The characters’ back stories indicate survivors’ guilt. Spider-Man may not keep kosher, and The Hulk may have missed his bar mitzvah, but the ethos and sensibilities of these assimilated characters remain clearly Jewish. Earnestly didactic, Brod offers brief accounts of anti-Semitism, science fiction and the crimes of the Nazis. (The first thing Captain America did was give Hitler a frask in punim: a slap in the face). The author also traces the thread of ethnicity through comics’ Golden and Silver Ages, and he salutes old Mad magazine artists and current continental and Israeli graphic novelists. He pays appropriate respect to the seminal work of Will Eisner, Jack Kirby and Art Spiegelman, and to the novel Kavalier & Clay by Michael Chabon.  Brod’s scholarly but lively narrative does a fine job of tracing “how the people of the book became the people of the comic book.”

For fans and students of popular sociology, an eclectic and pithy confirmation that many colorful heroes who speak in balloons are, indeed, Jewish.