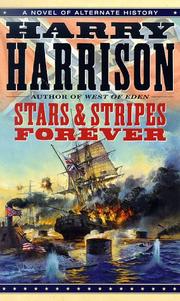 Another alternate-world workout from the veteran Ireland-resident American author, following his splendid Dark Ages trilogy (concluded with King and Emperor, 1996). This time, Harrison travels the high-traffic American Civil War thoroughfare. Here, as in real-world history, the Civil War is already under way when the captain of a US warship removes two Confederate bigwigs from a British vessel in international waters. Thereafter, matters diverge: in reality, a furious and minatory British diplomatic retort was toned down by Queen Victoria’s beloved Prince Consort, Albert; in Harrison’s version, Albert dies before he can rewrite the dispatch, leaving President Lincoln facing a senseless war with Britain. Meanwhile, thanks to several key changes in personnel, the Union’s armed forces gain better equipment and grow stronger. In due course, British forces, massing in Canada, invade: predictably so, since their inflexible and conservative tactics are designed to wage not merely the previous war of 1812 but the Revolutionary War. At the same time, the iron-built Monitor and the ironclad Virginia duly clash in Hampton Roads, rendering almost the entire British Navy obsolete. Finally, a British force sent to break the Union blockade of the Gulf Coast accidentally attacks and destroys a Confederate stronghold, leaving the British commander-in-chief, the Duke of Cambridge, with no alternative (as he sees it) but to mount a full scale invasion of the CSA as well. Naturally, when attacked by a common enemy, the USA and CSA set aside their differences to deal with this new threat. Expect sequels. The best alternate worlds’such as Ward Moore’s Bring the Jubilee—branch off from reality at a single, precise point. Harrison’s, though, involves a string of what-ifs, each more improbable than the one before. The Civil War scenario has wide, guaranteed appeal, yet savvy readers will recognize wish-fulfillment, no matter how cleverly disguised as docudrama. (Author tour)