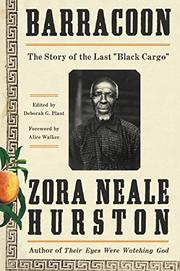 A newly discovered work of anthropological and historical reportage by the canonical African-American writer.

Cudjo Lewis (c. 1841-1935), originally named Kossola, was enslaved in America for five years. An Isha Yoruba from the town of Bantè, he arrived in Alabama as the Civil War was stirring. A student of the pioneering ethnologist Franz Boas, Hurston (Every Tongue Got to Confess: Negro Folk-Tales from the Gulf States, 2001, etc.) conducted a series of interviews with Lewis toward the end of his life, in 1927, who, on learning of her interest, said, “Thankee Jesus! Somebody come ast about Cudjo! I want tellee somebody who I is, so maybe day go in de Afficky soil some day and callee my name and somebody say, ‘Yeah, I know Kossola.’ ” The initial manuscript, a scholarly article, fell into disrepute when, in the 1970s, scholars discerned that it borrowed heavily from existing literature. This fuller manuscript derives from Hurston’s original fieldwork, so that there is no question of plagiarism. Editor Plant observes that in the work, Hurston “was engaged in the process of actualizing her vision of herself as a social scientist and an artist who was determined to present Kossola’s story in as authentic a manner as possible.” That authenticity includes rendering his words in patois. While Hurston writes that even though Kossola’s account is not strictly historical, it serves “to emphasize his remarkable memory.” That mark of the griot, or West African traditional storyteller, is evident as Kossola recounts moments of resistance, as when enslaved women rose up against a vicious overseer: “dey all jump on him and lashee him wid it. He doan never try whip Affican women no mo’.” Such episodes, including one in which Kossola tried to convince his former owner to give the manumitted slaves some of the land on which he worked, are historically valuable indeed, while his renderings of biblical stories and West African folktales are of ethnographic interest.

We are fortunate to have this late work of Hurston’s, which is sure to be widely read.

HOW TO CHANGE YOUR MIND
by Michael Pollan
Nonfiction

EVERY TONGUE GOT TO CONFESS
by Zora Neale Hurston
Nonfiction

I LOVE MYSELF WHEN I AM LAUGHING... AND THEN AGAIN
by Zora Neale Hurston
Fiction

SERAPH ON THE SUWANEE
by Zora Neale Hurston
Nonfiction

DUST TRACKS ON A ROAD
by Zora Neale Hurston
Fiction

MOSES, MAN OF THE MOUNTAIN
by Zora Neale Hurston

LINCOLN AND THE POLITICS OF SLAVERY
by Daniel W. Crofts
Children