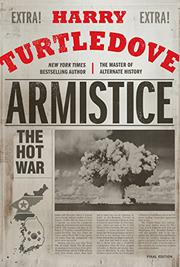 From the Hot War series, volume 3

Wrapping up the author’s latest alternate-history trilogy (Fallout, 2016, etc.), in which he explores the question: what if Truman had used nuclear weapons in the Korean War?

Turtledove provides just enough detail to keep us apprised of the overall picture. By 1952, major cities in Europe, the USSR, China, and the U.S. lie in ruins. America and Germany are allies trying to repulse a Soviet attack, while Soviet satellites states rise up in rebellion. President Harry Truman, still in office after two Russian A-bombs wiped out Washington and the Pentagon and mourning the loss of his family, presides over a makeshift government in Philadelphia, dickering with Eisenhower to stay in power until elections can be organized while plotting to take out Stalin. For those who must continue to fight, or live with the consequences, the struggle for survival goes on. Those familiar with Turtledove’s distinctive approach know themes such as race, religion, politics, and the reality of interminable warfare will get a workout, while the story’s focus remains on ordinary characters and how they cope with their particular circumstances. Unreconstructed former Waffen-SS Capt. Rolf Mehlen fights with America against Soviet invaders. In Britain, USAF bomber pilot Bruce McNulty mourns the loss of his beloved and wrestles with guilt over his part in the killing of millions. In South Korea—yes, the war drags on; unleashing nuclear weapons made not a scrap of difference—Capt. Cade Curtis schemes to bring to America the young Korean soldier who saved his life. In California, appliance installer Aaron Finch tries to build a life in the aftermath of atomic bombing. Luisa Hozzel, a German hausfrau, wonders if she will survive the Siberian gulag.

Though there are a few historical missteps, readers who savor the patient accumulation of detail around each scenario will by now be thoroughly addicted.