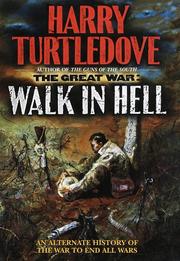 Third in Turtledove’s series of increasingly improbable alternate-history yarns (The Great War:  Walk in Hell, 1999, etc.).  The primary thrust is to recast the American Civil War as WWI.  Thus, in 1917, the North and its ally, Germany, battle a Confederacy supported by Britain and France.  Russia, present in the real WWI but absent from Turtledove’s American equation, is represented by the South’s blacks:  slaves no more, though still oppressed, and now emboldened and inspired by Marxism, they’ve launched their own revolution.  All this is not so much alternate history as patriotic solipsism, Comrade, with likely sounding ingredients heated and stirred into an unrecognizable goulash:  what-if transformed into what-not.