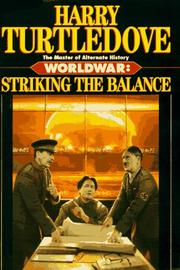 Final installment of Turtledove's long alternate-history Worldwar saga (Upsetting the Balance, 1996, etc.), in which the progress of WW II is disrupted by lizardlike alien invaders. A conservative and ancient race, the aliens—they sent out probes a thousand years ago—were expecting to go up against pikemen and armored knights on horseback. Instead, they're facing nuclear weapons and a world that has united against them. A cast of thousands with a plot to match, well-drawn if unoriginal aliens, a wealth of fascinating speculation—and scope for any number of sequels.