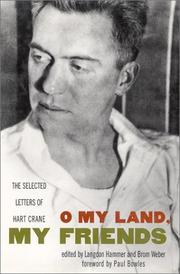 O MY LAND, MY FRIENDS

 From the poet Hart Crane's surviving 1,200 letters, a choice selection of 350 (141 published for the first time, and others for the first time in full) that shed substantial light on his creative process, his aesthetics, and the key moments of his life. Crane is one of the unhappy few among poets whose talents burn brightly but all too briefly. He was only 32 when he jumped from the S.S. Orizaba into the Atlantic. Habitually broke and hard-pressed to find work in the midst of the Depression, devastated by mixed reviews of his masterwork, The Bridge (which had consumed five years of effort), he spoke toward the end of feeling like ``a rat in a cage.'' In these letters, we can all too clearly trace his downward spiral. Full of youthful vitality and exhilaration, he skipped college and moved to New York, intent on becoming a poet. Then came quarrels with his family, his inability to hold a job, and a drinking problem that became increasingly serious, leading to a number of ``incidents'' and even arrests. He did have a gift for friendship, and his correspondents include such notables as Eugene O'Neill, Alfred Stieglitz, Malcolm Cowley, Yvor Winters, and Allen Tate. Crane was his own best critic, and he offers up spirited insights into his work, such as his exegesis/defense of his poem ``At Melville's Tomb.'' He also encloses a number of early drafts of his poems, and it is fascinating to watch the creative process at work as he tugs and pulls each verse towards its final form. Editors Hammer (English/Yale) and Weber (editor of The Complete Poems of Hart Crane) have chosen well, and Hammer's commentary is very helpful in placing the letters in their proper biographical context. Long and densely packed, but full of revelations about this important avatar of American Modernism. (illustrations, not seen)