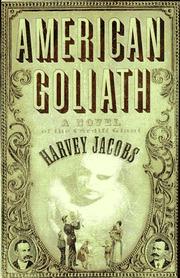 A fascinating picaresque novel, set in postCivil War America, by the underrated comic surrealist whose previous fiction includes The Egg of the Glak (1969). First things first: This is a masterpiece. It's the story, based on fact, of a hoax perpetrated in 1869 by one George Hull, black-sheep son of a Binghamton, New York, cigar-making family, who, upon hearing an overzealous preacher's assertion that the biblical ``Giants in those days'' may have existed in America, hires sculptors to construct a huge simulated human figure, buries it on his cousin's Cardiff, New York, farm, and arranges for the ``discovery'' of what will thereafter be known (and widely advertised as) ``the Cardiff Giant.'' Among those who scramble for a piece of the giant, and the action, are plutocrat Cornelius Vanderbilt, showman extraordinaire P.T. Barnum (who harbors presidential ambitions), actor Edwin Booth, scheming boxing promoters who exhibit ``Battling Mammoths,'' journalist Barnaby Race (who seeks both the truth and a good story), and a less-than- heavenly host of clergy, grifters, and dupes who display several highly amusing varieties of mass hysteria. The novel is a poker- faced paean to American enterprise, hucksterism, and criminality, energized by Jacobs's easy mastery of period detail and rhetoric (he even contrives a marvelously florid verse attributed to an impressionable poet who visits ``the giant's'' remains). And, in a spectacular magic-realist twist, Jacobs presents (in italicized interpolated fragments of dialogue) what seem to be the thoughts of the nonexistent giant—``created,'' perhaps, by George Hull's greed and by his country's hunger to believe in such marvels. P.T. Barnum sums up George Hull's nefarious accomplishment beautifully: ``What you did was a wonder and a legend for the ages. A beautiful scam and splendidly wrought.'' The same may be said of Harvey Jacobs's stunningly inventive and charming fiction—arguably this year's best novel.