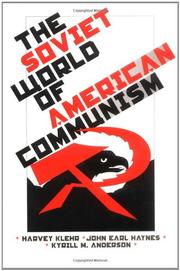 THE SOVIET WORLD OF AMERICAN COMMUNISM

With the publication of this book, the debate about whether the Communist Party of the United States (CPUSA) was a genuinely home-grown movement or a tool of the Soviet Union has been finally answered. Based on the archives of the Communist International (Comintern) in Moscow, Klehr and Haynes (coauthors of The Secret World of American Communism, not reviewed) and Anderson (a Russian archivist) make it clear that, throughout the period from its founding in 1919 until the dissolution of the Comintern in 1943, the CPUSA was heavily funded by the Soviet Union, which selected and paid its leaders, and dictated its strategy. The volume doesn't purport to be a comprehensive history of the party but concentrates on the relationship with Moscow. It is clear that that subordination damaged the ability of the party to make the alliances and adjustments that would have increased its already considerable influence in the labor movement, where by the end of WW II Communists led or helped lead 18 CIO affiliates. While large numbers of individual members became disillusioned and resigned, the party obediently followed every twist in Soviet strategy, from the Nazi-Soviet Pact to its repudiation when Germany attacked the Soviet Union. Most shameful of all, the authors note, there is not a single document in which an official of the CPUSA tried to save anyone from Stalin's purges. Indeed, there were occasions in which they leveled accusations that sent Americans to the Gulag. This belief in Soviet perfection ``gave American Communists strength,'' convincing them that it was possible to create an American utopia; the Khrushchev revelations about Stalin's crimes lost the party more than three-quarters of its membership. This is one of those seminal books that do not merely contribute to a debate, but effectively end it.