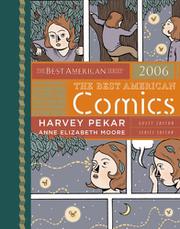 The latest addition to the publisher’s venerable “Best American” series not only provides an expansive survey of the contemporary graphic landscape, but serves as an effective introduction to an art long consigned to the cultural underground.

Series editor Anne Elizabeth Moore considers the mainstreaming of American comics—particularly those aimed at adult readers—to be a mixed blessing at best, since the most inspired work proceeds from a radical, subversive impulse that resists housebreaking. Yet the 30 examples chosen here by Pekar (of American Splendor fame), following Moore’s initial screening, show few signs of pulling punches or playing it safe. Highlights range from the 47-page, psychologically disturbing narrative by Justin Hall (“La Rubia Loca”)—in which a woman with multiple personalities disrupts a bus tour of Mexico—to the one-page “Only Disconnect” strip by Alison Bechdel, from her “Dykes to Watch Out For” series, in which a marriage proposal just might be a strategy for avoiding intimacy. Pekar’s selections pay tribute to seminal masters, with current work from Robert Crumb and Gilbert Shelton, along with a cartoonist’s confessional on the creative process, by Lynda Barry. The juxtapositions in David Heatley’s “Portrait of My Dad” blur the line between memory and dream. Chris Ware’s “Comics: A History” compresses centuries of graphic progression into two pages, though longer essays by Moore and Pekar put the contemporary explosion of interest in graphic narrative into context, showing how the form has developed, what resistance it has encountered and why comics matter.

A worthy launch for what appears destined to become a valuable annual anthology.