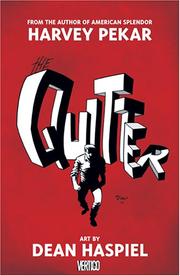 Pekar digs deep into his childhood to find the roots of his desperate fear of failure.

Anyone who’s read even a few pages of Pekar’s voluminous ongoing graphic biography, American Splendor, knows that they’re not dealing with a happy man. What they might be a little taken aback to learn, after reading this book, is just how exceptionally angry he is. This is a guy who grew up using his fists almost as often as his tirade-prone mouth. Given a bright, dramatic graphic treatment by Haspiel, this depicts Pekar growing up after World War II in Mount Pleasant, a Jewish and Italian Cleveland neighborhood that was becoming predominantly African-American. Pekar, just about the only white kid on the street, routinely gets into street fights. By the time he gets to high school, far from developing a sensitive artistic temperament, all he wants is to be a fighter, and he goes out of his way looking for guys to wallop. At the same time, his crippling insecurities start to take hold, and he begins to sabotage himself time and again, all to avoid failure. Once out in the working world, he keeps screwing around and acting the clown, behavior that could come as a surprise to those familiar only with his more dour later work (Pekar, it seems, wasn’t always a grumpy old man). Eventually, the more familiar elements of his life are brought together: the brief flirtation with beatnik hipsterdom, the series of dead-end jobs, the continual, torturous worry about money and respect. It’s all handled with Pekar’s usual self-mocking, breezy forthrightness, as though he’s got no time to mess around by playing nice. One frame shows him peering anxiously into his mailbox, wondering, “Boy, I’d a thought someone would’ve written me a letter about my new book by now.”

A lean and angry work, anchored by a mellowing sense of self-discovery.