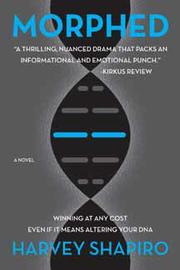 Holding himself responsible for his son’s death, Dr. Speak Singleton relocates to Park City, Utah, where his role as the doping control officer (DCO) in the cycling events of the 2012 Olympics presents him with an opportunity for atonement.

When Liam Singleton is caught using topical testosterone, a form of steroids, his father, Speak, an emergency room doctor, is quick to chastise him; only hours later, Speak stares at the lifeless body of his son, who crashed into a tree on the way to the emergency room. Liam’s death is the final blow to Speak and Fiona’s marriage; she walks out while Speak relocates to the solitary confines of Park City, where he’s determined to preserve the anti-doping system as the DCO in the cycling events of the 2012 Olympics. Immediately apparent are the sinister intentions of Team USA member and Tour de France winner Luke Garver and Coach Whitford, a medical genius who has devised a muscle-DNA altering substance that will not only pass through the anti-doping system but can also reduce the effects of aging. Seemingly past his prime, Garver, who has been shattering all of the cycling records set by Lance Armstrong, is a living example of Whitford’s prowess. Whitford and his right-hand man, Flint, know no bounds, as evidenced by the brutal slaying of Erik Hikem. Speak meets Troy Hale, another member of Team USA, through Hikem’s accident and immediately likens Troy to his son. Despite his insecurities and intimacy issues, Speak is a compassionate character who seeks the female touch and finds it in paramedic and fellow volunteer Julia Anderson. The dichotomy between the two medical practitioners, Speak and Whitford, is stunning—while one is ready to endure criticism and a tarnished reputation in his fight against steroids, the other is just as determined to plow through any obstacle that will prevent him from becoming rich through his creation, regardless of the cost in human lives and side effects of genetic doping. Speak and Whitford, two characters who have a scarred past and are searching for redemption—or revenge—are, on their own, enough to make this narrative a worthwhile read. The element of the 2012 Summer Olympics, educational information on steroids, fast-paced dialogue and the relationships between Troy and Speak and Speak and Julia are simply icing on the cake. A thrilling, nuanced drama that packs an informational and emotional punch.