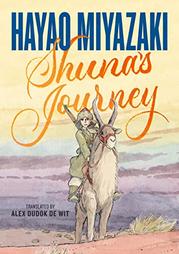 A dangerous quest to feed an impoverished land leads to chance encounters and awe-inspiring sights.

Shuna, the prince of a humble, struggling country, acts on the advice of a dying traveler from an Eastern land to seek out seeds that will grow bountiful grains. What he finds is a hostile city built on greed with an active slave trade. After meeting Thea and her little sister, Shuna fights to free them from enslavers. Every scene in this cinematic work stands apart with breathtaking watercolors aided by expert staging and blocking. The sights along Shuna’s journey range from a derelict ship in a treacherous desert to supernatural creatures and settings. The certainty and simplicity of Shuna’s motivations along with Thea’s own narrative arc allow the story to move nimbly from one larger-than-life spectacle to another. The pages read right-to-left manga style, while large panels and minimal dialogue create an immediate, immersive experience for readers. The narration sits outside or along the edges of panels, allowing the lush visuals maximum room to impress. Afterwords from the author and translator describe the story’s roots in a Tibetan folktale as well as comparisons to Miyazaki’s later animated works; this story, translated from Japanese, was originally published in Japan in 1983 before Miyazaki rose to fame with Studio Ghibli. The story’s cultural origins are cued through characters’ garb and other visual elements.

A reimagined folktale as grand as its painted visuals are sublime.